I've always been interested in philosophy of science, and earlier today I was thinking a bit about some commonly-held ideas in the field of biology which I disagree with. Here are a few controversial views that I have about living things and evolution. They're strong beliefs that are loosely held. What are your thoughts?

1. There is no essential difference between a living thing and a non-living thing.

Below are a few proposed definitions of "life," but they don't work. I'll explain how they either encompass too much or too little (Cleland and Chyba 2002).

Life is matter that can reproduce itself and evolve as survival dictates (source). This common definition stems from Darwinian evolution. Let's consider someone who is infertile. They cannot reproduce, yet we still clearly consider them to be living, so the definition doesn't work. (In the next section, I'll demonstrate that "evolve as survival dictates" is meaningless.)

For any other definition, I can come up with exceptions just as easily. Something with a metabolism? Look at a car. Something with negative entropy? Here's my refrigerator.

In McKay's 2004 article on how to search for life, he acknowledges (and cites) the difficulties associated with defining life, but ultimately concludes that we should search for "energy, carbon, liquid water, and a few other elements such as nitrogen, sulfur, and phosphorus." I don't see the reason to search for any of those things if we're not even confident that we would identify "life" if we saw it.

I'll admit that even if we can't define what it means for an individual thing to be alive, there might still be notable characteristics about a group of things that are alive. My point is that there is nothing fundamentally different about an individual living thing.

I'll also admit that just because we can't define something doesn't mean that there's nothing that fundamentally distinguishes it. As Cleland and Chyba suggest, we had no acceptable definition of water before the development of molecular theory. To be fair, a similar definition for life would require discovering some sort of fundamental "life force" that falls outside of our current framework for explaining things. That seems unlikely to me and almost more like a religious belief.

What about the argument that life is a spectrum?

One solution is that life is a spectrum from "undeniably non-living" to "undeniably living." That would explain why there's no hard and fast rule as to whether something is alive.

If that's the case, then the extreme of "living" still needs to be described. I think that if it is a spectrum, then the side of "living" is very human-centric (or anthropocentric). That is, when we say something is "living," we really mean "more like humans." No one would deny that a gorilla is alive (it looks so much like us), a sponge is questionable at first glance, and a virus barely doesn't meet the cutoff. Of course we'd place humans on the extreme of "undeniably living," which is suspicious to me and makes me think that it's still an arbitrary spectrum.

Why do people feel like there's something special about life?

You might wonder why we have such a strong urge to believe that there's something fundamentally different about living things if it's not actually the case. My argument is that our propensity for identifying things as "living" just served evolutionary utility. To identify something as living allowed us to see it as predator or prey and respond accordingly. The organisms that didn't have this sense were at a huge disadvantage.

2. Evolution is just a description of how a group of entities, whether living or non-living, can change over time. It is not a "force."

Example of the misconception:

"Evolution is the single greatest force in the universe; it is the only thing that is permanent and it drives everything."

I respectfully disagree, Ray Dalio. Evolution is not a force, and it does not drive anything. (In Ray Dalio's defense, he might not have been using "evolution" in the traditional biological sense.)

None of the mechanisms of evolution require things to be living

Evolution happens in a few different ways, but there's nothing about those mechanisms that's specific to living things. They're just logical statements that basically amount to describing the only ways that a population of things (anything, not just life) could possibly change. Evolution isn't a "force."

Although the names "genetic drift" and "gene flow" appear to be tied to living things, the underlying concepts are not. 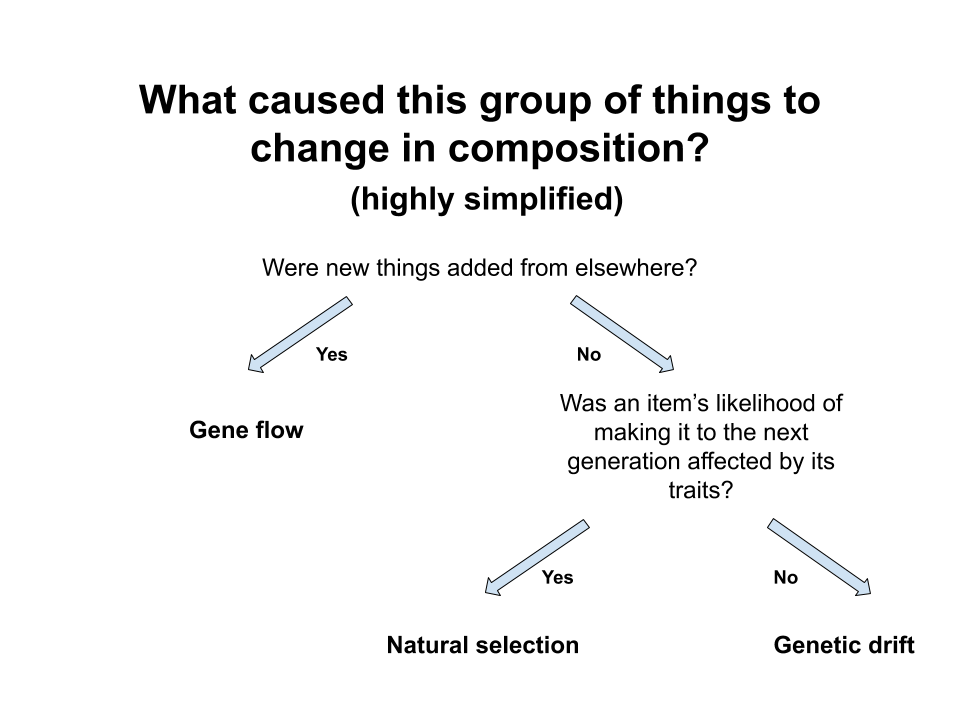 3. Evolution does not help us understand the "purpose" of humans in any way whatsoever.

Here's a random blog post that makes reference to this misconception: https://blogs.scientificamerican.com/guest-blog/is-the-meaning-of-your-life-to-make-babies

So is making babies -- and having genes survive through the generations -- the meaning of life? The answer is yes -- from an evolutionary gene's eye view… This is modern knowledge that is not to be taken lightly.

I disagree. Evolution doesn't imply that it's "good" for your genes to survive or that your genes have a "meaning" to perpetuate themselves. It's just that the genes that do happen to perpetuate themselves will be the genes that exist next generation. That's all there is to it. To evolution, it's not a good thing, it's not a bad thing, it's just necessarily the case.

That means that evolution doesn't imply that the "purpose" of living things is to survive and reproduce. It's not your purpose, and it's not your genes' purpose.

It also means that evolution doesn't justify any other behavior. For example, someone might argue that hoarding resources makes them more likely to survive, so it's justified by evolution. That's not the case, since evolution does not imply that our purpose is to increase our reproductive fitness. If you want that to be your purpose, that's fine, but that's not what evolution says.

Back to all posts